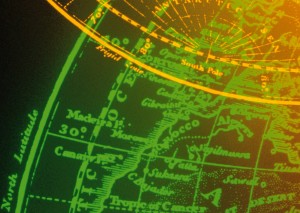 Ahmad watched as the last group of his people began stepping through the portal, escaping the oncoming hordes. It was the only way to save his people, and the sorcerer assured him that the place he found for them all to live was free from turmoil, a bit dry, perhaps, and a few scattered ruins, but no one to rival the eventual greatness of his own people. He tried not to think about all the palaces, fountains, schools, and other great works that must be left behind.

The young king looked over to the sorcerer then, and as if feeling his gaze, the older man looked back. He had a worried look on his face, and had been poring over a lengthy scroll. The small man pushed his way through the throng toward the place where Ahmad was waiting and watching the stream of people.

“Is something wrong with this magical portal you constructed for us, sorcerer?” Ahmad asked when the man was within earshot.

The bearded face pinched and glanced around before he spoke, “No, not exactly.”

“Well, I was doing some further reading, and looking over some of my calculations, and to double check I looked over some of the logs of those who discovered these methods…”

“Right, well… You remember the bit I was telling you about many many different worlds along-side ours?”

Ahmad raised an eyebrow. “Yes, and you found us one that’s different enough that we’ll all be safe there.”

“Yes, I did, but there is a slight… hitch.” the sorcerer licked his lips and pulled a bit on his beard before he continued, “If I’m understanding this part of the scroll correctly, there may be other groups very similar to you and yours also fleeing their worlds for the safety of the one we’re going to.”

“Similar to my group?”

The old man nodded, but Ahmad saw a slight quaver in his cheeks.

“How similar?” he asked the sorcerer.

“Erm… exactly similar, my king. Each and any of them, in fact, are you almost precisely.”

Ahmad nodded to himself and watched another small family step wearily through the portal. He was surprised to find that it made a certain sense. In the logic the old man spoke about these other worlds, of course there must be other Ahmads willing to make this same journey, and finding themselves in the same place.

“I suppose,” he said aloud after a moment’s consideration, “I’ll have to find a way to build better and more palaces than even myself, eh?”

The old man looked surprised at this response, but Ahmad continued. “Also, I suppose we’ll have to change the color of our banners.” He laughed then, shrugging off the sorcerer’s worried looks.