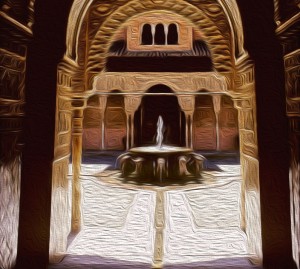 The creatures were tall. That’s the impression I’ll be left with the longest. They loomed over us in a menacing way, despite the ethereal pleasantness of their overlarge faces.

There were dozens of us in the temple, or whatever it was, there were lots of columns and strange fabrics, and the balconies looked out over a wide valley. The others were all leaders, like me, some more exotic than others, some more wealthy than others, some rulers of great nation states, some of tiny city states, but leaders of men, one and all. None of us spoke the same language exactly, but when we spoke in this place all knew what was said.

It was a few days before we discovered why we were there. These days were filled with good food, and interesting conversation. We were catered to by these creatures, but we were left wondering where we were, and why. None of them would answer us, if they even could. Oddly, none tried to escape the place. We felt as though we were guests, and that we belonged there.

It was during an evening meal when the fight broke out, the leader of a small tribe from some plains I’d never even heard of got into a disagreement with a rotund king from a nation state on the other side of the sea from my own. When the smaller man raised his hand to strike the other, he vanished in a sickening whiff of dust and ash.

A creature who must have been a representative for their leadership came to us and explained what had happened. His language was like distant tolling bells, but like everyone else here, we understood him when he spoke: All of us had been infected with a special metal parasite, designed long ago by these creature’s ancestors, it would watch us and our descendants forever from the inside, and any attempt at violence would result in instant death.

The mood of the temple was silent and contemplative for the remainder of the meal and into the evening.

While I slept that night, I was returned to my home and my people. I can only guess that the others were as well. That very morning, my subjects began to die by the hundreds. They were infected as well. It was a struggle to get it under control, as panic was making people quick to anger. It was a week before I felt like people were finally starting to understand, and in the weeks since, there have been very few such deaths reported. We’ve all learned to keep our tempers, and to fight with words, not fists or swords. We have no choice.

Yesterday, I disbanded most of the military. They were still able to train and keep their armor polished, but what do I need them for now, parades?

Many of the philosophers and wise men rejoice at the new world, and say that the reasoning of the creatures is unimportant, but I can’t help but wonder: Are they angel or demon? protector or conqueror? or perhaps most terrifying: Are they farmers?

Tanni and the RapUnsEl – excerpt