It’s been eight months since the last update roundup from Manawaker Studio. I hope this note finds you well. I know you’re busy; I’ll try to keep it quick. 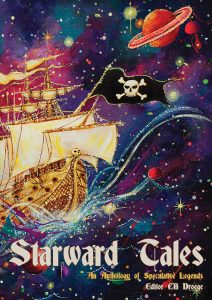 The big news that prompted this update is the release of Starward Tales, Manawaker Studio’s latest anthology. My biased opinion is that it came out rather nicely. It’s full of great stories, poems, and visual art depicting sci-fi interpretations of classic stories by a great group of talented creators.Pick it up in paperback or Kindle over on Amazon.

The response to the Starward Tales submission call generated so many great submissions that there will be a second volume next year, for which submissions have just opened. If great things continue to roll in for this call, then it might become an annual collection, which would be rad. 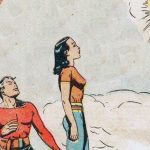 If you haven’t noticed it yet, a new weekly feature has appeared on Manawaker’s blog in the last few months. Recycled Comics is a project in which I’m taking old (public domain) comic books,  removing all the words, and then putting my own words in to tell a new story. The first arc, “Rattleback Skies” will be concluding next week, and a new one will begin soon after. You can check them all out here. A bit hard to read since they’re just posted as blog entries. Creating a proper interface for the comics is on my to-do list.

Recycled Comics only exists because of my fabulous Patreon patrons. If you don’t know about it yet, Patreon is a place where fans can help me create cool new stuff by setting up monthly support. In exchange, patrons get access to a special content feed, and certain tiers of support also get a subscription to Manawaker books. If you miss Flash Fiction Fridays, you can read them over there on the patron feed for just 1$/month.

Patrons are also partly responsible for the great Flash Fiction Podcast, which is now 30 episodes into the first season, featuring a new flash fiction story every Thursday, and you don’t need to be a Patron to enjoy it. You can listen each week on the Manawaker blog,  iTunes, Google Music, or even YouTube.

In the last update I mentioned that Dragon Line would soon be available to play online at Boardgameareana.com. The project hit some roadblocks in the first part of this year when the game was about 95% finished, and the end result is that the game now has a new developer, and work has picked back up after months of stalled progress, though much of the previous work has to be done again. Keep an eye on the Manawaker blog for news of the release. Hopefully, sooner than later.

Thank you for your time, and your interest in Manawaker Studio.